I wrote this after I returned from my quarterly CEO forum. It’s a peer group where we learn from each other’s wins and losses.

During the discussion, one of my good friends, Mike McKee, said something that struck a chord with me.

“The best teams are built on trust, conflict, and commitment in that order,” he said.

Let’s take each one in turn.

What is meant by trust?

Trust is about being naked.

(Get your head out of the gutter.)

The kind of trust that is necessary to build a great team is what I call vulnerability-based trust. This is what happens when members get to a point where they are completely comfortable being transparent, honest, and naked with one another, where they say and genuinely mean things like “I screwed up,” “I need help,” “Your idea is better than mine,” “I wish I could learn to do that as well as you do,” and even, “I’m sorry.”

This level of naked vulnerability usually comes from a shared experience of overcoming a difficult challenge, sharing a big WIN, or taking a risk and opening up to each other.

I often say it’s okay to fight because that is how we find the best ideas, make the best decisions, and reinforce trust.

We are not trying to build an organization based on consensus. That’s a recipe for bad decisions, mediocrity, and failure.

“I propose we postpone further discussion of this matter until our next meeting to give ourselves time to develop disagreement and perhaps gain some understanding of what the decision is all about.”

That’s what Alfred Sloan — the man credited with making GM a giant company in the 30s — said to his advisory board. (Peter Drucker is famous for sharing the story.)

Basically, Sloan presented a business proposal to the group. No one said a peep and they all agreed. He sent them home to find something to disagree with.

You see, the basic premise is that you can’t build genuine commitment without conflict. You can’t commit to a decision until you feel you’ve had a chance to understand it, ask questions, and provide input.

It’s not about being right. It’s about finding the best ideas. 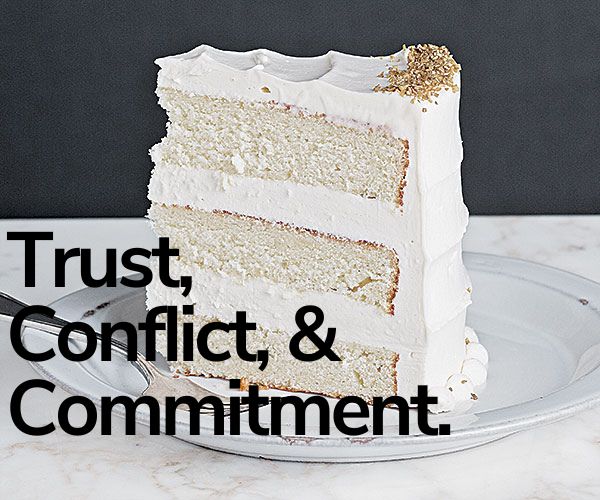 Early in my career at Intel, I often heard the phrase “disagree and commit.” It was doctrine when Andy Grove, the legendary CEO, was at the helm.

He believed that even though a team couldn’t agree on an issue, they still had to leave the room all-in on one course of action.

“Everyone involved must give the decision reached by the group full support. This does not necessarily mean agreement: so long as the participants commit to back the decision, that is a satisfactory outcome,” he would explain in his management courses and his book.

(I can hear his Hungarian accent in my head.)

He felt this level of commitment was the only way to survive in the hyper-competitive markets they operated in.

When asked why, Andy said, “An organization does not live by its members agreeing with one another at all times about everything. It lives instead by people committing to support the decisions and the moves of the business. All a manager can expect is that the commitment to support is honestly present, and this is something he can and must get from everyone,”

Intel went on to dominate the semiconductor and personal computing industry for decades.

Trust, conflict, commitment. In that order.

No matter your venture’s stage, you want your people to have the courage to speak up, join the debate, and come packing with the best ideas.  That’s how you will build a great company.

But it starts with trust, followed by a little conflict and a mountain of commitment.

Every bite gets us closer to your mission.

[Pair this article with:  Why How Smart You Are Has Nothing To Do With Your Success As CEO]