Here, there were no demanding customers, no competition putting pressure on me. There were no employees anxiously seeking consensus and no investors asking endless questions about our sales forecast. Absent were the industry publications offering views of the future from their favorite pundits.

If I had access to my “tricorder,” it would have perhaps shown my location to be somewhere on the moon. Fortunately, my addictive device was safely locked up far away from here.

Tonight, it was just me, walking across the “Valle de la Luna” under a cloudless sky that offered a clear view into the origins of our galaxy.

I had transported myself to this distance place in the Atacama desert to embark on an annual ritual — Finding Solitude.

As leaders of high-growth ventures, we are constantly bombarded with critical decisions. We make thousands each week that make or break our companies. We spend time multitasking: putting out fires, communicating, rushing to meetings, making a sale, all while monitoring our phones for the next crisis. This can be exhausting. Sometimes, in this fatigue — often, depleted of energy — is when we can make fatal decisions.

But, what we rarely get is, time for ourselves to just think.

Once a year, I ship myself (and my wife) off to a remote location on earth to find rest and solitude. Being far away from the business, away from management, away from decisions, offers me an opportunity to gain perspective. With my mind at rest, and my stress reduced, I finally possess the cycles to think.

I think about my life at home. My wife and I discuss our relationship. I think about the challenges ahead for my business. In this process of purposeful thought, I find unexpected solutions. My own beliefs sprout unencumbered by groupthink.

I like to read about history during these escapes. In the texts, I usually find examples of systems that transcend time. Sometimes, I don’t think at all. That’s when I often get epiphanies that unlock the next stage of my journey as a CEO.

The Advantages of Solitude

Leadership and solitude are not often combined. But, a look at one leader in recent history that stood alone uncovers the advantages of doing so.

In 2008, General David Petraeus, former head of US central command, was named “intellectual of the year” by Prospect magazine. As the judges saw it, “the so-called ‘Petraeus doctrine’ is the only written piece of intellectual output in the last two years that has made a direct difference to the lives of millions. It’s radical among other things for being the first actively humane warfighting doctrine to ever come out of the Pentagon, enshrining the ideas that winning a modern war requires ensuring the security and wellbeing of the civilian population, that humanitarian assistance and construction projects are critical to any fight, and that 80 percent of the battle is a political one.”

“It wasn’t always easy for [Petraeus]. His path to where he is now was not a straight one. When he was running Mosul in 2003 as commander of the 101st Airborne and developing the strategy he would later formulate in the Counterinsurgency Field Manual and then ultimately apply throughout Iraq, he pissed a lot of people off. He was way ahead of the leadership in Baghdad and Washington, and bureaucracies don’t like that sort of thing. Here he was, just another two-star, and he was saying, implicitly but loudly, that the leadership was wrong about the way it was running the war. Indeed, he was not rewarded at first. He was put in charge of training the Iraqi army, which was considered a blow to his career, a dead-end job. But he stuck to his guns, and ultimately he was vindicated. One of the central elements of his counterinsurgency strategy is precisely the idea that officers need to think flexibly, creatively, and independently,” as essayist William Deresiewicz eloquently explains to a plebe class at West Point,

In other words, Petraeus successfully fought against the conventional wisdom of the Pentagon. He took the time to think, found solitude, and developed a winning approach to Iraq.

Deresiewicz also believes today we have a crisis in our society. Many young leaders exit some of the best schools in the country without the necessary faculties to become leaders.

What he is preaching is that the best leaders, like Petraeus, make time to think. They find solitude, quiet places where they can develop their own thoughts and perspectives. This is the key to developing critical thinking skills vital to effective leadership.

Some of my favorite leaders all have their own way of finding time alone to think.

Bill Gates, when he was CEO of Microsoft, religiously went on an annual reading retreat. He would sequester himself with a week or more of reading materials. He emerged many times with new strategic imperatives for his personal computer empire. His legendary “Internet Tidal Wave” memo came from one of these retreats. This was when he decided to integrate the Internet Explorer with the operating system.

President Barak Obama survived the White house by isolating himself in his “cave.” It’s a room dedicated to deep thought that he insists on having in every home. There he’d read presidential biographies and sometimes apocalyptic sci-fi epics. Of the latter he said it, “unexpectedly put things in perspective: “The scope of it was immense. So that was fun to read, partly because my day-to-day problems with Congress seem fairly petty — not something to worry about. Aliens are about to invade!”

My friend, David Cancel, CEO of Drift, takes a 3-month sabbatical every three years. (He shares some of his learnings here.)

Even in fictitious examples of leadership, we find the importance of rest and solitude. My favorite Star Trek captain is Jean-Luc Picard. As Commander Riker of Star Trek: The Next Generation puts it, “[Captain Picard’s] ready room on the starship enterprise serves as a place to surround himself with things that give him a much-needed perspective on his duties.”

How to Find Solitude

Finding solitude is a learned behavior. It takes practice. But, you don’t need to transport yourself to another planet to find it. While is it a counter-intuitive aspect of leadership, it is a prescription for success. 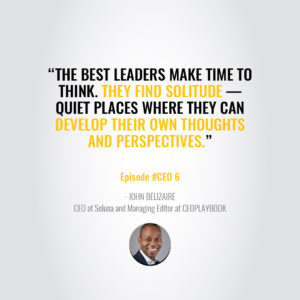 Listen to me read this article live on the #CEO Podcast Series on the B2BGrowth Show. You can find this episode HERE, and many more, by subscribing to the B2B Growth Show on Apple Podcasts, on our website, or on Spotify.

John Belizaire is a serial entrepreneur, advisor, and investor. He is also the founder and managing editor of CEOPLAYBOOK — an online publication dedicated to exploring what it means to be a startup CEO. Connect with him on LinkedIn and Twitter. Subscribe to his popular newsletter — Mental Candy — read by over 500 CEOs.

Want Some Mental Candy in Your Inbox?
Go to Top